Sat, 29 August 2015 - Shravani Purnima (Full Moon Day) a day of celebrations for Lord Shiva’s Devotee, while Raksha Bandhan is a festival meant for Brothers and Sisters.

Around mid-August, Hindus all over the world celebrate Shravan Purnima Raksha Bandhan. “Raksha” means protection, and “bandhan” means bound or binding.Raksha Bandhan is primarily a Indian festival kindling the deepest emotions of love and affection amongst the siblings. 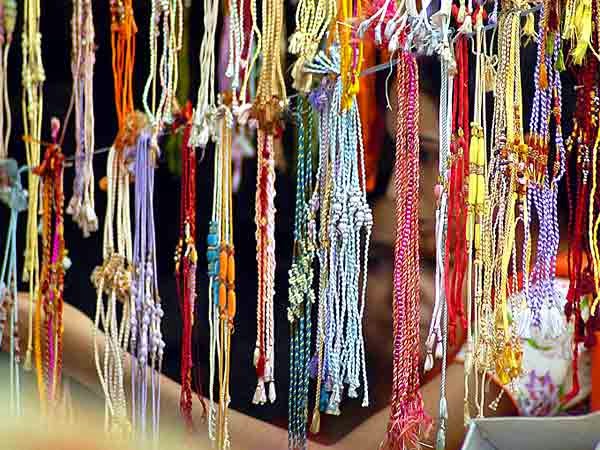 Just like all Indian festivals, this is also celebrated with lots of verve. The sister ties the rakhi on the brother’s wrist and both pray for each others’ well being followed by a pledge from the brother to take care of his sister under all circumstances. The brother then usually gifts something to the sister to mark the occasion. Celebrated enveloped in the festivities. The mirth that surrounds the festival is unsurpassed. Amidst the merriment the rituals are also followed with great devotion.
Raksha Bandhan is a festival celebrating the bond of affection between brothers and sisters. The day when the siblings pray for each others’ well being and wish for each others’ happiness and goodwill. As the name ‘Raksha Bandhan’ suggests, ‘a bond of protection’, Raksha Bandhan is a pledge from brothers to protect the sister from all harms and troubles and a prayer from the sister to protect the brother from all evil.
The festival falls on the Shravan Purnima (full moon day of shravan month) which comes generally in the month of August. The sisters tie the silk thread called rakhi on their brother’s wrist and pray for their well being and brothers promise to take care of their sisters. The festival is unique to India creates a feeling of belongingness and oneness amongst the family.
rakhiraksha bandhanraksha bandhan dateshravani purnima
Next article Next Post
Previous article Previous Post
Click to comment
‹ Newer Post Older Post › Home
Subscribe to: Post Comments (Atom)