The Majesty of Kashi - The Sacrosanct Place of Pilgrimage 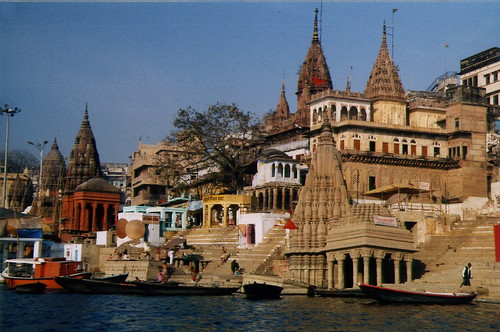 Once Sage Agastya and his wife Lopamudra went to the mountain called Sri Shail, where Kartikeya lived at that time. After travelling for sometime, both of them arrived near Sri Shail mountain. Pointing his finger towards the mountain, Agastya told his wife--'One, who has a good fortune of seeing the peaks of this mountain, never takes a second birth.'

Lopamudra replied in amazement--' If the sight of this mountain was capable of giving salvation then why do you long for Kashi?'

Sage Agastya then went on to clarify that there were many other holy places capable of giving salvation. Prayag is one such place. It is capable of bestowing all the four 'Purusharth' to man - Dharma, Arth, Kaam and Moksha. Apart from Prayag, there are many more holy places like Naimisharanya, Kurukshetra, Gangadwar, Avanti, Ayodhya, Mathura, Dwarka, Badrikashram, Purushottam kshetra which are capable of giving salvation to a man. But none of these places can match Kashi because Kashi is incomparable.
Sage Agastya and his wife Lopamudra circumambulated Sri Shail Mountain and climbed up Lohit mountain where they found Lord Kartikeya. Both of them eulogized Kartikeya by singing vedic hymns in his praise. Lord kartikeya was extremely pleased by their devotion and said- O revered sage! You can understand Kashi's importance by the fact that, though I am capable of reaching any place according to my wish but still, here I am doing this austere penance for the attainment of Kashi. I must confess that I have not been successful in my efforts till date. If any body thinks that he can attain to Kashi just by performing austerities than he is totally wrong. Kashi can never be attained to until and unless one has the blessing of Lord Mahadeva. And one who is fortunate enough to have reached Kashi must under no circumstances leave it till he is alive.

O Agastya! You are blessed because you had the good fortune of residing at Kashi. Please allow me to touch your body, which has acquired holiness due to its proximity to Kashi.' Having said this, Kartikeya touched different parts of agastya's body as if he were touching the sacred soil of Kashi.