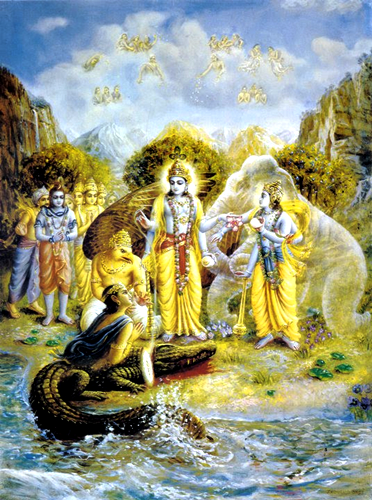 
There was a beautiful mountain named Trikuta. The waves of the ocean lapped at the foot of Trikuta. There were thick forests on the mountain. And in the forests there lived a king of elephants named Gajendra. He ruled over all the other elephants in the herd.

One day Gajendra was playing with his family & friends, the other elephants in a lake in the forest. Suddenly, a crocodile that lived in the pond caught Gajendra by his leg. Gajendra, in spite of being an elephant could not break free. He then, called out for help. All his friends, the other elephants gathered around him and tried to help, but in vain. The crocodile was stronger than all the elephants put together. They gave up. Gajendra tried for a long time to escape from the crocodile. He trumpeted until he was hoarse. The crocodile simply would not let go.

Gajendra Moksha – Elephant Kings’ total Surrender
The elephant and the crocodile struggled for a thousand years. When a thousand years over, the elephant began to tire, although the crocodile’s strength was still undiminished. Gajendra lost a lot of blood and he became very weak. He finally realized that only God could help him and called out to Lord Narayana.

The elephant started to pray to Lord Vishnu. Lord Vishnu heard Gajendra’s cries for help and appeared on his vehicle, Garuda. He sent the Sudarshana Chakrawhirling down. The Chakra killed the crocodile and set Gajendra free. Gajendra offered Lord Narayana a Lotus and thanked him for saving his life.

Thus Lord Vishnu saves whoever prays to him.

Meaning: One should meditate upon Lord Vishnu, who wears white garment, who is all pervading, who has a bright complexion, who has four arms, who has poised, pleasant face for removal of all obstacles.