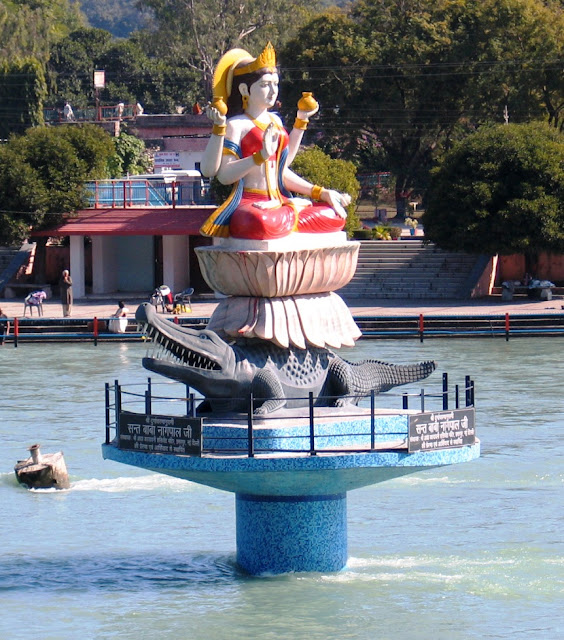 Those countries and those points of the compass that are destitute of the sacred waters of Ganga are like nights without the moon or like trees without flowers. Verily, a world without Ganga is like the different orders and modes of life when they are destitute of righteousness or like sacrifices without Soma. Without doubt, countries and points of the compass that are without Ganga are like the firmament without the Sun, or the Earth without mountains, or the welkin without air. The entire body of creatures in the three worlds, if served with the auspicious waters of Ganga, derive a pleasure, the like of which they are incapable of deriving from any other source.

As snakes become deprived of their poison at the very sight of Garuda (eagle), even so one becomes cleansed of all one’s sins at the very sight of the sacred stream of Ganga. They that are without good name and that are addicted to deeds of sinfulness, have Ganga for their fame, their protection, their means of rescue, their refuge or cover. Many wretches among men, who become afflicted with diverse sins of a heinous nature, when they are about to sink into hell, are rescued by Ganga in the next world (if, notwithstanding their sins, they seek the aid of Ganga in their after-years).

They, O foremost of intelligent men, who plunge every day in the sacred waters of Ganga, become the equals of great Munis and the very deities with Vasva at their head. Those wretches among men that are destitute of humility or modesty of behaviour and that are exceedingly sinful, become righteous and good, O Brahmana, by betaking themselves to the side of Ganga. As Amrita (drink that confers immortality) is to the deities, a Swadha (oblation offered to Pitris during sacred fire ceremony) is to the Pitris, as Sudha is to the Nagas, even so is Ganga water to human beings.

Those who, although possessed of the physical ability, do not seek to have a sight of the auspicious Ganga of sacred current, are, without doubt, to be likened to persons afflicted with congenital blindness or those that are dead or those that are destitute of the power of locomotion through palsy or lameness. What man is there that would not reverence this sacred stream that is adored by great Rishis conversant with the Present, the Past, and the Future, as also by the very deities with Indra at their head. What man is there that would not seek the protection of Ganga whose protection is sought for by forest recluses and householders, and by Yatis and Brahmacharins alike?

That man who dwells by the side of Ganga up to the time of his death, adoring her with reverence, becomes freed from the fear of every kind of calamity, of sin, and of kings.

Creatures that live on Earth, in the welkin, or in heaven- indeed, even beings that are very superior- should always bathe in Ganga. Verily, this is the foremost of all duties with those that are righteous. The fame of Ganga for sanctity has spread over the entire universe, since she bore all the sons of Sagara, who had been reduced to ashes, from here to heaven.

Ganga is the daughter of Himavat, the spouse of Hara, and the ornament of both heaven and earth. She is the bestower of everything auspicious, and is competent to confer the six well-known attributes beginning with lordship or puissance. Verily, O king, Ganga is the one object of great sanctity in the three worlds and confers merit upon all. Truly, monarch, Ganga is Righteousness in liquefied form. She is energy also running in a liquid form over the earth. She is endued with the splendour of puissance that belongs to the ghee that is poured with Mantras on the sacrificial fire. She is always adorned with large waves as also with Brahmanas who may at all times be seen performing their ablutions in her waters. Falling from heaven, she was held by Siva on his head. The very mother of the heavens, she has sprung from the highest mountain for running over the plains and conferring the most precious benefits on all creatures of the earth. She is the highest cause of all things; she is perfectly stainless. She is as subtle as Brahma.