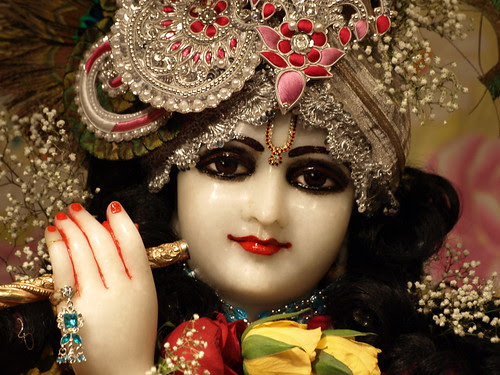 
Shri Krishna Janmbhoomi Mathura/Vrindavan : Thu, 25 August 2016
DWARKADHISH TEMPLE (Gujarat) : Thu, 25 August 2016
***
This is the Birthday of Lord Krishna, the eighth Divine Incarnation. It falls on the 8th day of the dark half of the month of Bhadrapada (August-September). This is one of the greatest of all Hindu festivals. Lord Krishna was born at midnight. A twenty-four hour fast is observed on this day, which is broken at midnight.

Temples are decorated for the occasion. Kirtans are sung, bells are rung, the conch is blown, and Sanskrit hymns are recited in praise of Lord Krishna. At Mathura, the birthplace of Lord Krishna, special spiritual gatherings are organised at this time. Pilgrims from all over India attend these festive gatherings. The Lord appeared when the moon entered the house of Vrishabha at the constellation of the star Rohini, on Wednesday, the 8th day of the second fortnight of the month of Sravana, which corresponds to the month of Bhadrapada Krishnapaksha according to the Barhaspatyamana, in the year of Visvavasu, 5,172 years ago (from 1945), which means 3227 B.C.

During the daylight hours of the astami one should observe the vow of fasting in the association of devotees, and staying awake at night, at midnight one should perform the abhiseka according the vidhi just described, accompanied by joyful singing and dancing.

The next day one should celebrate the Lord’s appearance with great festivity and respect mahaprasadam with the vaisnavas. One who performs worship of th Lord on Janmastami day according to the method stated above, and with the mood of service of the inhabitants of Vraja, will certainly gain the affection of Krishna. Having gained that affection he will be blessed with deep love of Krishna (prema) and will directly serve the Lord in Vrindavana eternally.