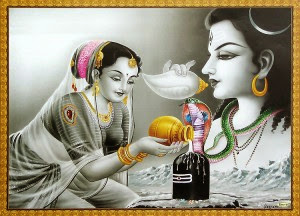 PRADSOH VRAT – SHIVA PUJA
ALL THINGS in this vast creation function upon definite laws. There is always a beautiful system and sound rationale governing every phenomenon and process, mundane or mystical. Just as the gross elements and physical forces operate differently under different states and conditions, so also the subtler and higher forces respond and react in the inner mystic planes, and in the purely spiritual processes like meditation, prayer, worship, etc. Therefore, you will find definite injunctions for performing certain types of worship in the morning, certain other injunctions for the midday prayers, and still others for the evening worship. Again, some observances are meant to be performed during certain phases of the moon, some when a particular star is in the ascendant, or at the time of a particular conjunction of planets.


The PRADOSHA worship is to be done in the evening twilight on the 13th day of each lunar fortnight.


It is the worship of Lord Shiva for victory and success in all undertakings, and the fulfilment of all your heart’s cherished desires. When you desire to obtain a favour from a superior person, don’t you naturally approach him at a moment when he is likely to be in a very pleasant frame of mind? You will perhaps see him after he has had a good dinner and is happily chatting with a friend in a hearty, expansive mood. Even so, the Hindu, especially the Hindu who is engaged in the motivated type of worship, usually selects the most pleasant aspect of God for his worship. He performs it at a time which the ancient Rishis experienced as being the most helpful and efficacious in propitiating the Deity. The Pradosha worship is based on such mystic psychology.

Pradosh Vrat is the worship of Lord Shiva and Parvati when they both are in an extremely propitious mood. Repeatedly worsted in war by the demons, the gods approached Lord Shiva to bless them with a leader for their celestial hosts. They came to the Lord at twilight on the thirteenth day of the lunar fortnight and found Him in the blissful company of His consort, Parvati. Hymned and glorified by them, Siva immediately granted their prayerful request. Hence, the extreme auspiciousness of the period.

The Skanda Purana relates how Sandilya Muni prescribed Pradosh Vrat (fasts) to a certain Brahmin lady. She came to the sage with two boys, her son, Suchivrata, and an orphan prince, Dharmagupta, whose father was slain in battle and the kingdom overrun by enemies. Acting upon the advice of the sage, the woman and the boys performed the Vrata with great devotion. After four months, that is, in the eighth Pradosha, Suchivrata obtained a pot of nectar and drank the divine ambrosia. Prince Dharmagupta won the hand of a celestial princess and, as ordered by Lord Siva, with the help of the celestial king himself, his enemies were slain and his kingdom restored to him. Then Dharmagupta attained the Lord’s supreme abode.

So easily, and yet so greatly is the Lord of Kailash pleased by this Vrata (fasts). One who takes this Vrata (fasts) on that day, and keeps vigil at night after the fast is over. Bathing an hour before sunset, the worshipper first performs a preliminary worship of Lord Shiva, together with all the others of His divine family, namely, Parvati, Ganesha, Skanda and Nandi. After the worship of Ganesha, Lord Shiva is invoked in the special kalasha placed on a square mandala with a lotus drawn in it and spread over with darbha grass. After the formal worship has been completed, a Pradosha storyMaha Mrityunjaya Mantra 108 times. In the end the sacred kalasha water is partaken of, the sacred ash is applied to the forehead, and the water which was used to bathe the Lord, is drunk. is read and heard by the devotees. This is followed by the recitation of the
A gift of a pot, a cloth and an image of the Lord is given to a Brahmin to conclude the worship. A very important point to be remembered in this connection is that during this auspicious period all the hosts of celestial beings and gods come down from the heavens and attend the worship in their subtle forms. This adds immensely to the sanctity of the worship. This Vrata is highly lauded by the scriptures and is of very great sanctity and importance to worshippers of Lord Shiva. The mere sight of the Deity in a temple during this period will destroy all sins and bestow bountiful blessings and Grace upon the fortunate beholder. Even a single bael leaf (leaf taken from the wood-apple tree) offered to the Lord at this unique, auspicious moment equals a hundred Mahapujas.

It is usual to have special additional lights in the shrine during the Pradosha. To light even a single wick at this juncture is highly meritorious and productive of untold benefits, spiritual as well as material. Most fortunate and blessed is the person who performs the Pradosha Vrata, for upon him Lord Shiva showers His choicest Grace and blessings in a very short time.
hindu vrats upvaashow to do pradosh vratpradosh vrat procedureshivatrayodashi pradosh vrat vidhi
Next article Next Post
Previous article Previous Post
Click to comment
‹ Newer Post Older Post › Home
Subscribe to: Post Comments (Atom)