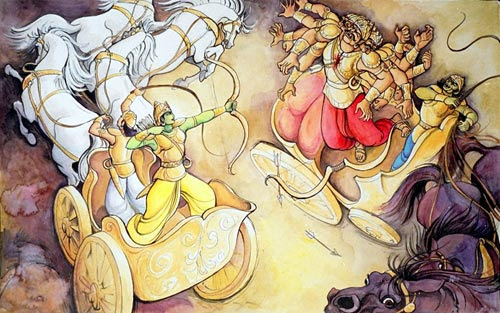 Dussehra (Vijay Dashami) : Friday, 19 October 2018
Dussehra - Dashera - Vijaya Dashmi - is the most popular festival in India. It is a Hindu festival, which is celebrated all over India to mark the defeat of Ravana by Lord Rama. Dussehra also symbolises the triumph of warrior Goddess Durga over the buffalo demon, Mahishasura. 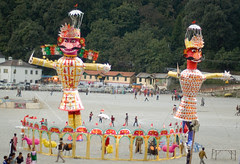 Dussehra can also be interpreted as "Dasa-Hara", which means the cutting of the ten heads of Ravana. On the day of Dussehra, Ram, killed the great demon Ravan, who had abducted Ram's wife Sita to his kingdom of Lanka. Ram, along with his brother Lakshman and devoted follower Hanuman, and an army of monkeys fought a great battle to rescue his lovely wife Sita. The war against Ravan lasted for ten days. Sita had been returned to her husband Ram and they now make their way to Ayodhya in triumph and glory. Dussera is the tenth day after Navratri. It marks the end of the nine days of Navratri.

The festival of Dussehra is the principle celebration in many parts of the country. It is celebrated with great fanfare in Kullu and Mysore.

Dussehra is the day, when Rama killed Ravana and won back his wife (Hence also called Vijayadashmi) who had managed to save her honor from the dirty hands of Ravana and was waiting anxiously to meet her husband.
Dussehra is also reminiscent of the end of the exile and banishment of the Pandava princes in the epic Mahabharata and their return with their weapons to reclaim their kingdom.

Vijayadashami is also celebrated as the day of victory to rejoice about Durga's triumph over the demons led by Mahishasura. It is essentially a festival in honor of Durga.

Vijayadashami is also the day of the Saraswati or the deity of knowledge and learning.

Prime Celebrations
In Himachal Pradesh, a week -long fair in the hill town of Kullu, is a part of the Dussehra celebrations. From the little temples in the hills, deities are brought in procession to the 'maidan' in Kullu, to pay homage to the reigning deity, Raghunathji. The celebration actually begins nearly 10 days in advance as per tradition.

In Mysore, Karnataka the Mysore palace is illuminated for a whole month during Dusshera and caparisoned elephants lead a colourful procession through the gaily-decorated streets of the city. It is the most colourful celebration of Dusshera in world. The spectacular procession taken out on this day is really enjoyable.
dusheraNavratrivijaya dashami
Next article Next Post
Previous article Previous Post
‹ Newer Post Older Post › Home